There are several possibilities how to do an exorcism. At first, Mage performs an astral trip to find out what kind of demons cause the possession. I'm going to describe here the exorcism used in Christian tradition, which was most of the times efficient for the place where we live in - Europe. Later, we will also describe other traditions: Hebrew, Tibetan and Voodoo. Exorcism can be performed only by a priest or a mage, who doesn't have any fear of death and demons. Otherwise there is a danger that a person can be possessed him/herself!!!

Place on the altar two white candles, one crucifix and a pentagram. As incense, use a mixture of Frankincense, Myrrh, Styrax and Dragon's blood. Before starting the exorcism, perform a pentagram ritual.

"In the name of the Father, and of the Son, and of the Holy Spirit, Amen" (or in Latin in nomine Patris et Filii et Spiritus Sancti Amen).✢ Celebrated commanders of Heavens' armies, Holy Archangels Michael, Raphael, Gabriel, Uriel, thank you, that you are coming to protect us during our fight with evil powers, against the lords of darkness and evil spirits below heavens! Thank you, you have come to help people, who were created by God to His image and redeem them from the tyranny of Satan! You are worshipped by people as their Lords of Protection; to you, Lord of Souls, commend the lost ones, to lead them into the heaven's salvation. Thank you, the Lord of Peace, that Satan will be destroyed under your feet, so that he can no longer put people in hold. Thank you, that you interpret our prayer in front of the face of the Almighty. He would come fast with his compassion. You capture dragons, the old snakes, namely Devil, Satan, and precipitate them shackled into hell, so that they cannot tempt people anymore.

Now you have to make room for Christ, for the eternal and bright light of the Soul. Because of your doings, you don't have place there. Here is space for Buschido, Buddha, Krishna and Shiva. Make room for life and light, which were paid by His own blood. Bend down humbly under the powerful hands of God; Yahweh, Adonai, Elohim, El Shaddai: flee away, we are calling holy and awesome names of Jesus, Yahweh, Adonai, Elohim, El Shaddai which hell is dread of, and which governs the power of the heaven and its realms and Cherubs and Seraphs praise all the time with the words: Holy, holy, holy is the Lord, the God of heaven's armies.

In the name and with the power of our Lord Jesus ✢ Christ, Yahweh, Adonai, Elohim, El Shaddai, Buschido, Jeremias and Abraham we conjure you, every evil spirit, every satanic power, every malign servant of hell, every devil's legion, horde and gang: you will be ripped out and expelled from souls, which were created to the image of God and which were ransomed through the blood of the divine's lamb. ✢ Don't dare anymore, you malignant snake, to delude the humankind. God Almighty, Yahweh, Adonai, Elohim, El Shaddai commands you ✢, although you in your great vanity want to be equal with him; His will is that all people will be saved and they know the Truth.

In the name of Jesus Christ✢, our God and Lord, and through the intercession of immaculate virgin and Mother of God Maria✢, Holy Archangels Michael, Raphael, Gabriel, Uriel✢, Holy Apostles Petrus and Paulus and all Saints✢, we focus our whole belief to turn away all malignant devilish influences.✢

Lord, thank you you listen to my prayer,
and you let my calling come to you.
May the Lord be with us,
and with our Spirits.

1 In the beginning was the Word, and the Word was with God, and the Word was God. 2 He was with God in the beginning. 3 Through him all things were made; without him nothing was made that has been made. 4 In him was life, and that life was the light of all mankind. 5 The light shines in the darkness, and the darkness has not overcome[a] it.
6 There was a man sent from God whose name was John. 7 He came as a witness to testify concerning that light, so that through him all might believe. 8 He himself was not the light; he came only as a witness to the light.
9 The true light that gives light to everyone was coming into the world. 10 He was in the world, and though the world was made through him, the world did not recognize him. 11 He came to that which was his own, but his own did not receive him. 12 Yet to all who did receive him, to those who believed in his name, he gave the right to become children of God— 13 children born not of natural descent, nor of human decision or a husband’s will, but born of God.
14 The Word became flesh and made his dwelling among us. We have seen his glory, the glory of the one and only Son, who came from the Father, full of grace and truth.

15 He said to them, “Go into all the world and preach the gospel to all creation.16 Whoever believes and is baptized will be saved, but whoever does not believe will be condemned. 17 And these signs will accompany those who believe: In my name they will drive out demons; they will speak in new tongues; 18 they will pick up snakes with their hands; and when they drink deadly poison, it will not hurt them at all; they will place their hands on sick people, and they will get well.” 19 After the Lord Jesus had spoken to them, he was taken up into heaven and he sat at the right hand of God. 20 Then the disciples went out and preached everywhere, and the Lord worked with them and confirmed his word by the signs that accompanied it.

14 Jesus was driving out a demon that was mute. When the demon left, the man who had been mute spoke, and the crowd was amazed.15 But some of them said, “By Beelzebul, the prince of demons, he is driving out demons.”
16 Others tested him by asking for a sign from heaven.
17 Jesus knew their thoughts and said to them: “Any kingdom divided against itself will be ruined, and a house divided against itself will fall.
18 If Satan is divided against himself, how can his kingdom stand? I say this because you claim that I drive out demons by Beelzebul.
19 Now if I drive out demons by Beelzebul, by whom do your followers drive them out? So then, they will be your judges. 20 But if I drive out demons by the finger of God, then the kingdom of God has come upon you.
21 “When a strong man, fully armed, guards his own house, his possessions are safe.
22 But when someone stronger attacks and overpowers him, he takes away the armor in which the man trusted and divides up his plunder.

17 The seventy-two returned with joy and said, “Lord, even the demons submit to us in your name.”
18 He replied, “I saw Satan fall like lightning from heaven.
19 I have given you authority to trample on snakes and scorpions and to overcome all the power of the enemy; nothing will harm you.
20 However, do not rejoice that the spirits submit to you, but rejoice that your names are written in heaven.”

My Lord, thank you you listen to my prayer,
and you let my calling come to you.
May the Lord be with us,
and with our Spirits.

Lord, thank you you don't remember our failures, even those of our fathers, and don't punish us for our faults. Now pray “Our Father, Who art in Heaven...
… and lead us not into temptation, but deliver us from evil. Amen.”
Thank you, o God, that through your names, you provide my issue with your power. God Almighty, thank you for listening to my request, and hearing the words from my mouth. Because proud people rose against me, rude people want my death, they don't see God. But God in my helper, the Lord protects my life. He sends malice back to my enemies. Your loyalty destroys them.

I am now offering my sacrifice to you with joy and I will praise your Name, o Lord, because you are merciful. The Lord had liberated me from all my misery and I can watch my enemies with my eyes. Glory be to the Father, and to the Son and to the Holy Spirit, as it was in the beginning, is now, and ever shall be, world without end. Amen.✢
Thank you, Lord, you have helped your servant,
who believes in you, my God
For me, be an immovable tower
Against my enemies
No one can defeat you.
The son of evil cannot harm him/her anymore.
Lord, thank you for sending your help from this sacred symbol.
And protecting your servant from Sion.

Then, one commands the devil as follows:
I command you, the evil spirit, wherever you are, and your whole accompaniment, who have this servant of God in your power: in the name of hominization, the cross, the resurrection and the ascension of our Lord for judgement: give me your names, date and time of your depart and signs! Obey me fully, you unworthy servant of God! Don't harm anymore this human being of God, any present beings or their property.

God of heavens, God of the earth, God of the angels and archangels, God of Archangels Michael, Raphael, Gabriel, Uriel, God of Fathers, God of prophets and saints, God of the Truth. You have the power to give life after death, to grant peace, there is no other God, you are the One. You are the creator of all seen and unseen and your kingdom is limitless. Thank you for making us free and giving us shelter and protection. In the name of our Lord Jesus Christ, Yahweh, Adonai, Elohim, El Shaddai, Buschido, Jeremias, Abraham Amen.
Thank you for hearing of our prayers!
Now, sprinkle the place with the holy water.✢

Note: ✢ Where is this cross sign, we make the sign of the cross (not to ourselves, but to the place, where is possessed person) with the holy water. 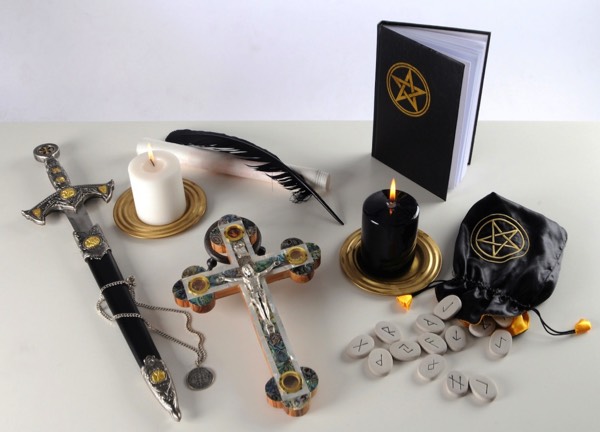 * The original text issued according to the order of pope Leo XIII (Roma rite), was adjusted to the needs of white magic rituals performed by Pavol Malenky and Marion Daghan Malenky.

Find out more about protection magic.